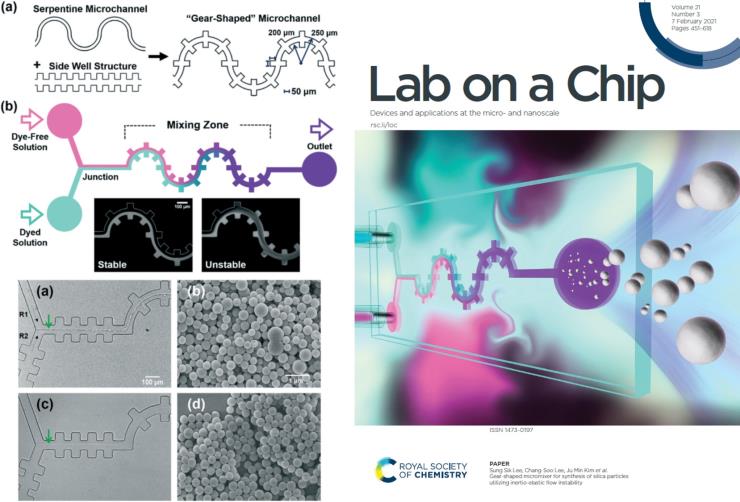 A team of researchers from multiple organizations, led by Prof. Kim Ju-min (Departments of Chemical Engineering and Energy Systems Research) and his team, has developed a microscale flow mixing technique capable of synthesizing more even nanoparticles. The researchers expect their latest discovery to have a wide range of applications, including medical diagnostics, as well as preprocessing of specimens and reaction-based processes in microfluidics.

Prof. Kim’s team worked with two other teams, led by Prof. Lee Chang-soo of Chungnam National University and Dr. Lee Sung-sik of ETH Zürich, respectively, to produce a microscale reactor. Their findings were published in a paper entitled, “Gear-shaped micromixer for synthesis of silica particles utilizing inertio-elastic flow instability,” featured on the cover of the February 7 issue of Lab on a Chip.

Profs. Kim and Lee and Dr. Lee participated as corresponding co-authors. Hong Sun-ok, a recent graduate of Ajou University with a doctorate in energy systems research and now affiliated with Lotte Chemical, was listed as first author.

Microfluidics is increasingly used in a number of applied fields, most notably for engineering point-of-care diagnostic devices that provide fast diagnosis. Efficient mixing of fluids is a crucial prerequisite for the preprocessing and core reactions of specimens in microfluidics. It is also the key performance requirement of micromixers.

Given the near impossibility of generating turbulence in micromixers, the inefficient expansion-based mixing method has been preferred thus far. Manual mixing, which relies on conventional fluid dynamics, requires fluid channels with complex designs and complex manufacturing processes. Moreover, as layer-based mixing requires normal-state flows of fluid, the mixed output is prone to sedimentation along the fluid surface.

Prof. Kim and the researchers discovered that flow instability, associated with diluted polymeric solutions, increases greatly in serpentine microscale channels that repeatedly contract and expand. They decided to apply this discovery to the development of a new micromixer with significantly greater efficiency.

The inertio-elastic micromixer that came out of this discovery offers greater mixing efficiency at a wider range of flow rates. In other words, it is capable of more efficiently mixing a wider variety of fluid materials with greater simplicity. The researchers expect that their new model can be more easily applied to large-capacity micromixers.

The researchers indeed applied their new micromixer to the synthesization of silica nanoparticles and confirmed that it was capable of producing particles of a more uniform size distribution (as measured in terms of distribution of particles of different sizes in a given specimen). They also demonstrated that their mixer was able to produce nanoparticles over a long span of time without the fluid channel becoming blocked—a problem common with conventional mixers.

Prof. Kim explained: “Our study demonstrates that it is possible to design a micromixer capable of maximizing flow instability of viscoelastic fluids like polymer solutions. Our study is also significant because it demonstrates our technique by applying it to the synthesis of actual nanoparticles with a uniform size distribution.”

This research has been made possible in part with support from the National Research Foundation of Korea’s Advanced Center of Excellence and personal research grants.

* Upper left: The serpentine channel developed by Prof. Kim’s team, and a conceptual diagram of how it increases inertio-elastic flow instability to facilitate mixing.

* Lower left: Particles mixed in a Newtonian fluid (a) show size distribution with a wide variance and nonspherical shapes (b). Particles synthesized in a dilute polymer solution with the help of inertio-elastic flow instability (c) boast uniform sizes and spherical shapes (d).

* Right: Cover of the February 2021 issue of Lab on a Chip featuring Prof. Kim’s study.

Sixty for One: Graphene with a "Twist" Can Enhance Nonlinear Light Conversion Efficiency