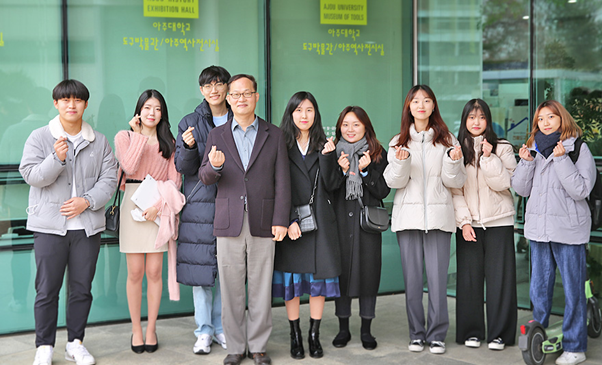 In deliberations for “The 24th Citizen's Criticism Award for Good Broadcasting” hosted by the Foundation for Broadcast Culture on December 11, 2021, the work of nine students from Ajou University won honorable mention and were selected for the award. This is a splendid feat following last year’s achievement where five students received awards.

Students entered the contest after studying the theory of criticism in content & text and the method for analysis by taking lectures in the Media Text Analysis Workshop and Broadcast Content Planning course taught by Professor Hong Kyung-soo from the Department of Culture and Contents.

In the contest, Na Eun-jeong, a student in the Department of Culture and Contents, won honorable mention for her critique of the Crimetrivia aired on tvN, title “Regrettable lack of density, dictionary of miscellaneous common knowledge.” Awardees of honorable mention will be presented with a certificate, a trophy, and a cash prize of 1 million Korean won.

“Students have grown remarkably by watching, critically reviewing, and discussing broadcasting programs,” said Professor Hong, who taught the students. “It is such a pleasure to see their efforts recognized by society and I hope this will propel them to achieve greater goals.”

The Citizen’s Criticism Award is hosted by the Foundation for Broadcast Culture (affiliated with the MBC Foundation) and aims to promote the development of broadcasting and viewer rights and interests. The award ceremony was held on December 17, 2021, while the winning works will be published as a critique book.