An Ajou University research team has developed a miniaturized robot (gripper) in the shape of a finger that can accurately measure the slightest pulse or heartbeat of living organisms. It is expected to be applied in the future as a bio medical robot since it can monitor bio signals by gently holding the cardiovascular system of tiny living organisms or a person.

The research team, led by Professors Han Seung-yong, Kang Dae-shik, and Koh Je-seong (photo from left, Department of Mechanical Engineering), announced their successful development of a miniaturized, high precision soft gripper 3 – 5 mm in size that imitates the functions of a human hand.

The team’s research results were published in the October 13, 2021 online edition of the prestigious Science Robotics under the title, “Vital signal sensing and manipulation of a micro-scale organ with a multifunctional soft gripper”. Noh Yeon-wook and Kim Min-ho, students in mechanical engineering at Ajou University, took part in the research as lead authors.

The human hand is unique among the grippers of animals and plants that exist in nature, as its five fingers can move independently and are dense with sensory cells that allow delicate, accurate handling, and can identify the condition of an object. Since the 4th Industrial Revolution began, many studies are ongoing to imitate the abilities of the human hand in many fields, such as medical and other robots.

Conventional grippers are mainly made of hard materials and cannot grip soft objects. Additionally, the installation of sensors to receive bio signals increases the size of these grippers, making them impossible to use with small living organisms. Miniaturized medical grippers require high precision control and integration with peripheral electronic devices and highly sensitive sensors and measurement.

The Ajou research team used shape memory polymer of variable stiffness where hardness and softness can be controlled to allow creation of a gripper with properties similar to the skin of a living organism. It also utilized silver Nano wires and a laser process to miniaturize sensors and managed to reduce the robot to 5mm or less. Silver Nano wires elaborately control each of the five fingers of a soft gripper, while also serving as temperature sensors that can monitor the bio signals of the object it is measuring and also deliver heat stimulus.

The soft gripper developed by the research team gripped a snail egg 3mm in diameter without damaging it, delivered heat to facilitate hatching, and measured the snail’s miniscule movements during hatching and its heartrate immediately after hatching (snail size: 400 – 699 micrometers). Furthermore, it gripped the blood vessel of a live pig to measure its pulse without hurting it, and managed to grip salmon roe, which are very delicate and easily damaged. The soft gripper itself weighs 25.4 milligrams but can momentarily lift objects up to 6400 times heavier than itself and continuously hold objects that are 1200 times heavier.

“Existing research on grippers has only measured the signals of the object they grip, but this research enabled grippers to diagnose, analyze results, and provide treatment to the object,” said Prof. Han. “It can be used in the development of miniaturized medical robots and in new platforms to analyze the mechanical movement, stimuli, and response of living organisms at the level of a human cell, an area full of countless challenges.”

He continued, “Through follow-up research, we plan to expand this into new directions, such as electrical stimuli, drug delivery, and wireless movement.”

This research was sponsored by the Korean Ministry of Science and ICT (MSIT)’s Individual Basic Research (New Research) program. 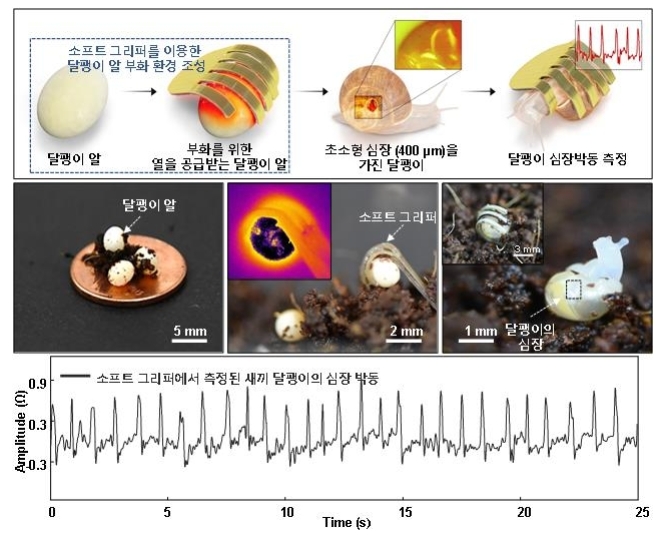 <Using a soft gripper to grip salmon roe and other objects>