An Ajou University research team has successfully developed a new peptide that can effectively induce endogenous stem cells that exist in every tissue of the human body. It is expected to have broad applications in the treatment of illnesses, such as myocardial infarction, degenerative arthritis, and rheumatic arthritis, since it can induce the regeneration of damaged human tissue without the injection of external stem cells.

The results were selected as the cover thesis for the September 4, 2021 online edition of the international journal Small under the title, “Endogenous Stem Cell-Based In Situ Tissue Regeneration Using Electrostatically Interactive Hydrogel with a Newly Discovered Substance P Analog and VEGF-Mimicking Peptide”.

The research team developed a new peptide substance using substance P (SP) analog as chemoattractant. This is the first study involving the use of substance P analog (SP1), which has been newly developed through molecular pathogenic simulation and assesses the migration of endogenous stem cells.

The research team used cationic chitosan and anionic hyaluronic acid to manufacture a substance with properties befitting a loading syringe that had no loss of SP1, and developed a new strategy around static electricity interaction. The SP1 discovered by the team confirmed that SP1 enhanced the migration ability of human mesenchymal stem cells by two or three times that of existing SP.

In an animal test, the research team confirmed that SP1 pulled a large number of human mesenchymal stem cells toward the hydrogel, followed by the vascular endothelial growth factor mimetic peptide inducting vasculogenic differentiation. This discovery shows that SP1-loaded hydrogel may be a promising tool to facilitate the regeneration of endogenous stem cell-based tissues.

“This new discovery will enable us to endogenously induce the regeneration of damaged human tissue without injecting external substances,” a spokesperson for the research team stated. “It will have dramatic applications in the treatment of illnesses, such as myocardial infarction, degenerative arthritis, and rheumatic arthritis.”

The research was sponsored by the Creative Materials Discovery Program of the National Research Foundation of Korea (NRF) and the Research Facility Establishment Program (Molecular Science & Technology Research Center (MSTRC)). 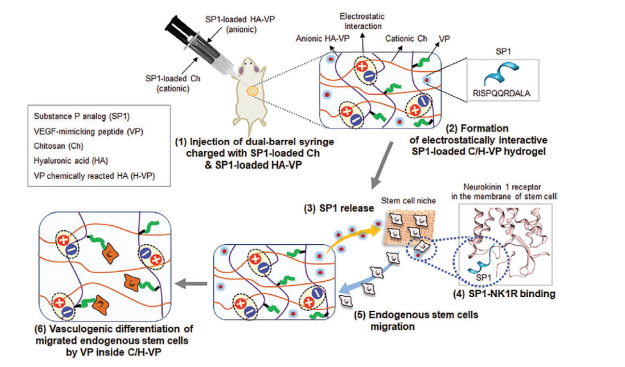 Selected figure from the research team’s thesis on the cover of Small (September 4, 2021 online edition) / provided by WILEY_VCH