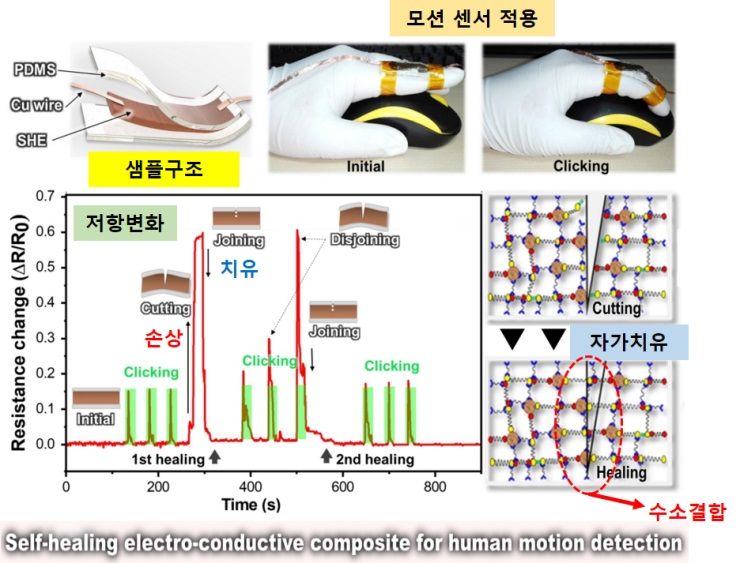 A team of researchers led by Prof. Seo Hyung-tak (Departments of Materials Science and Engineering and Energy Systems Research) has successfully developed a new self-healing composite material and a sensor based on that material. Highly conductive and elastic, the new material is expected to have wide-ranging applications, including wearable electronics, soft robotics, and artificial skin.

The composite invented by Prof. Seo’s team is made of a supramolecular polymer and copper microparticles, and the team developed an electronic wearable strain sensor capable of self-healing. The researchers’ work was published as the featured article in the September 7 online issue of Advanced Electronic Materials and entitled, “Intrinsically stretchable and self-healing electroconductive composite based on supramolecular organic polymer embedded with copper microparticles.” Rubaya Yeasmin, a doctoral candidate at Ajou, was listed as first author.

The human skin is structured so that it detects damage quickly and activates self-restoring mechanisms to prevent the damage from worsening and facilitate healing. Inspired by this natural self-healing mechanism of organisms, researchers worldwide are searching for new materials capable of self-healing and restoration, and possessing electroconductivity and elasticity (stretchability). It takes significant skill and resources to develop new electronic materials capable of restoring themselves after damage without external intervention or processes. Once invented, such materials can exert far-reaching ripple effects on industry and society.

In this project, the research team combined a supramolecular organic polymer and copper microparticles (1 μm = 1E-6m; for comparison, the average width of a hair strand is 100 μm). The resulting composite can be manufactured on a mass scale in aerosol and gel form. The copper concentration can also be adjusted to control electroconductivity of the final product. Supramolecular polymers support elastic and self-healing hydrogen bonding. The copper concentration can also be used to control the electric properties of semiconductors and conductors. The team has optimized the electrical properties of their composite so that it can continue to restore itself, notwithstanding multiple cuts.

The team used the new material to develop a new wearable strain sensor capable of self-healing, whose workings it successfully demonstrated by attaching it to the fingers of human subjects. By deliberately cutting and damaging the sensor and gauging its reaction, the team also confirmed its ability to restore itself.

Prof. Seo explained: “The self-healing material we’ve developed was made with affordable components and processes, without the need for great cost. A wide range of applications are possible beyond only wearable sensors, and include elastic IoT sensors, soft robotics, and industrial equipment.” 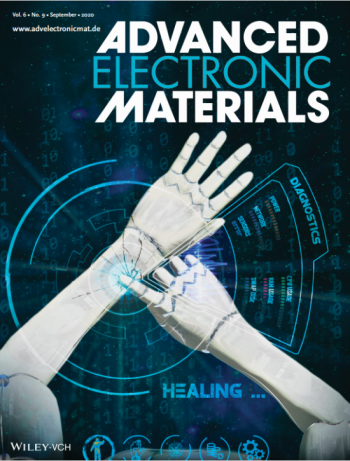