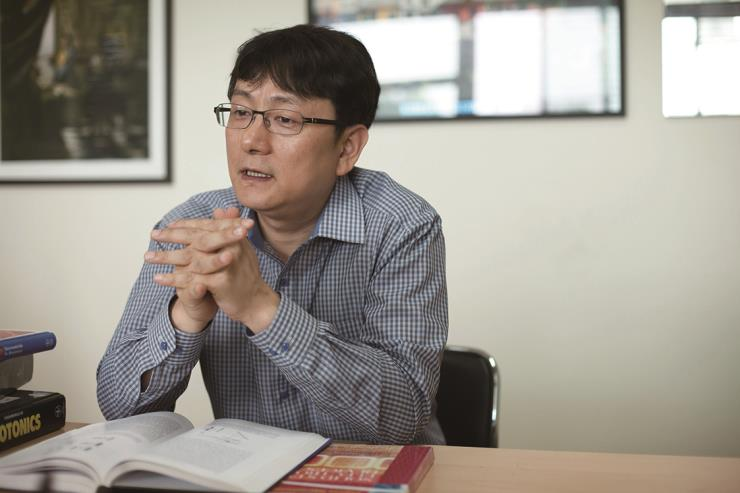 A team of researchers led by Prof. Ahn Yeong-hwan (Departments of Physics and Energy Systems Research, pictured) has succeeded in creating a new quantum energy level using a material that is expected to become central to next-generation solar cells.

The team’s work was published in the September issue of Nano Letters (IF = 12.344) with the title, “Phonon-Polaritons in Lead Halide Perovskite Film Hybridized with THz Metamaterials.” The team included other Ajou faculty members, including professors Ha Na-young, Park Ji-yong and Lee Soon-il, all with the Department of Physics, as well as Prof. Kim Dai-sik of the Ulsan National Institute of Science and Technology (UNIST). Kim Hwan-sik, doctoral candidate in physics at Ajou, also participated as first author.

The team created a hybrid of the perovskite film and the metamaterial used to create invisibility cloaks and tested how light in the terahertz range, between infrared rays and microwaves, behaved on it. The perovskite used for this particular experiment was a lead halide type, widely expected to become the central material of much more efficient solar cells in the future.

The perovskite hybrid, in its oscillating mode, reacted strongly with the electronic waves concentrated in the meta-structure, giving rise to a new phonon-polariton energy level. An energy level is the value of energy at its atomic and molecular levels. It refers to the level of energy that electrons absorb or release.

The team also demonstrated that the new energy level varies depending on numerous conditions or variables. The most important of these variables is crystallinity of the perovskite film. The team discovered, for the first time in the world, that the dynamics of the phonon-polariton energy level vary by the nanocrystal growth dimensionality (one-, two-, or three-dimensional). The team also succeeded in introducing a new model for explaining the interaction between nanocrystals that grow over time and light.

Prof. Ahn explained: “Our latest discovery can be applied to assessment of the crystal structure of next-generation solar cell films as well as optimization of their efficiency. Through follow-up research on the perovskite-metamaterial hybrid, we were also able to find lighting sources for future quantum optics.”

The project was made possible in part thanks to the Mid-career Researcher Program, co-managed by the Ministry of Science and ICT and the National Research Foundation of Korea, and Korea Energy Technology Evaluation and Planning (KETEP)’s Energy Workforce Development Program.